In this section, you will learn how to monitor for and solve memory leaks in your apps. The processes for monitoring memory usage varies by platform. You'll learn separately how to perform this feat on iOS and Android.

Let's start with a clarification: we're talking memory, not storage in this section. Memory, sometimes called RAM, is the volatile location in which your app and its data are retained while they're being processed by the CPU. Storage is the long-term location where app data is retained while you're not using the app or device. In a desktop computer, the distinction is a bit easier: memory is done with chips; storage is done with the hard drive, floppy disk, or CD-ROM.

In a mobile device, both memory and storage are implemented as chips. Storage uses Flash memory chips, slow, but such chips don't lose their contents when power is removed. Memory uses RAM-style chips (DRAM, etc.), which are fast but volatile (contents lost when power removed).

CPUs in smartphones and tablets are amazingly advanced. The JavaScript Core and V8 interpreters that Titanium uses are quite fast and well-optimized for mobile apps. Computation speed is rarely an issue with apps these days. Memory is typically the largest bottleneck, a factor you'll need to actively manage as your apps grow in complexity.

In this section, we'll see what factors go into determining how much memory your app uses. We'll see how Titanium frees memory, which will require a peek under the covers to see how JavaScript manages memory. And we'll look at issues that can cause memory leaks--memory allocations that grow over time to the point where your app could crash.

Memory limits vary by operating system and device and are not clearly documented by the vendors. Based on our sleuthing, here are the limits you must be concerned with:

The numbers for iOS are rough estimates. Apple does not publish information about their app termination threshold, managed by processes called "watchdog" (responsible for monitoring) and "jetsam" (responsible for warnings/purging). App termination is controlled entirely at the discretion of these processes and their behavior may change at any time.

The upside of this is that if you see a crash or device log referencing jetsam, this certainly indicates a memory issue.

Compared to the memory space available to the desktop, these are severely restricted amounts. Furthermore, iOS and Android can force-reclaim memory or force-quit an app when the system needs more free memory. You'll want to limit your memory use and free allocations when you can. Let's see how JavaScript frees memory and then how you can release memory in your Titanium app.

In some languages, the programmer must explicitly allocate and de-allocate memory within their programs. This manual process can take quite a bit of work and is often the source of bugs. JavaScript instead uses an automatic technique called garbage collection. With garbage collection, the JavaScript interpreter determines when objects are no longer needed, then destroys them to free the memory they were using.

Most modern JavaScript interpreters use a "mark and sweep" method for determining when to garbage collect objects. Periodically, execution stops while the interpreter scans memory building a list of every object in memory. It marks those to which there is a reference (an active variable name, being a property of on object that's in use, and so forth) and those to which there are no active references. When it's done with this sweep, the interpreter sends a "destroy" message to all of the objects that have no active references. Those object tear themselves down and release their memory.

To be clear, calling parent.remove() on its own does not destroy either the JavaScript or proxy object. You must null the JavaScript object to destroy its related proxy.

Destroying a parent object (setting it to null) will destroy any child objects as long as no other references to those child objects exist. Consider the following code snippet to get a feel for the specifics:

Make sure that you actively manage the Titanium objects you create, such as Windows, Views, and Buttons. Remove them from the view hierarchy and destroy them when you no longer need them. You might do this when a user closes a "dialog box" (view) or changes tabs in your app.

Memory leaks occur when your app allocates memory but doesn't release it. Leaks occur when unintended or overlooked references to objects remain in scope. When this happens, JavaScript can't garbage collect the objects and Titanium can't destroy the native proxies. Because the causes of leaks vary so widely, at best we'll be able to give you some strategies to attempt in order to solve the problems. There are no "cookie cutter" solutions for stopping memory leaks.

Creating and fixing a memory leak in a global event listener

To run a Titanium app from the Xcode build, you have two choices:

Lets continue! Apple's Instruments application is a handy tool for monitoring and discovering memory leaks. Here's how you can use it for this purpose:

If you make a change to your app, the most reliable way to gather new statistics in Instruments is to close it and start over.

On iOS, the runtime and other systems may frequently allocate (or deallocate) objects which can't be managed directly through your javascript code. In general, when checking your app for memory leaks, you should be filtering for objects with the "Ti" prefix.

Also note that by attaching the profiler after the app has started, you do not get any information on already-created objects until they are touched by the memory management system. To get more accurate information, you may need to open the Xcode project generated in your project's build/iphone folder, and choose Product > Profile, then configure the resulting Instruments launch as described here. 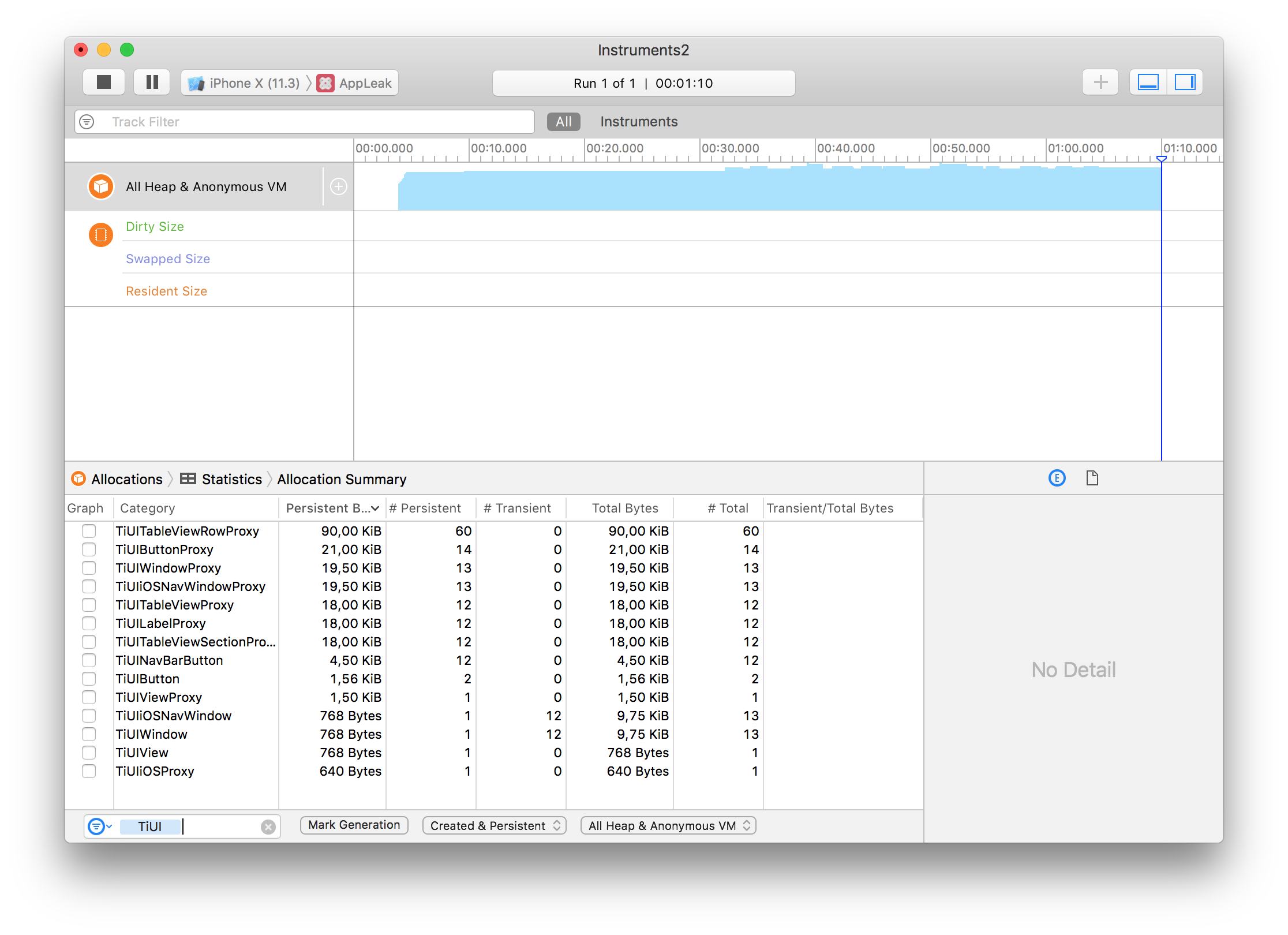 Android's DDMS Tool (opens new window) can show you memory leaks – both memory allocations that are not freed and objects that aren't garbage collected. Following the procedure shown here, you can watch as memory use and object allocations grow. You'll need to pair that information, with knowledge of your app to determine where within your app the cause might be.

These steps don't tell you exactly what is causing the leak in your app. Unlike Instruments, DDMS doesn't clearly show which objects are remaining in memory rather than being collected. You will need to test your app and watch the memory values to infer the potential causes of the leak.

You'll examine an app that has a memory leak deliberately included. You'll apply various fixed and check your work until you have eliminated the leak.

(This lab is written to work on iOS / macOS. See the notes at the end of the lab for Android information.)

The app-level listener added within build() remains in scope after the window is closed. This forces the objects the window contains to remain in scope, which means they cannot be garbage collected. When build() runs again, a new window and table are created, which also cannot be garbage collected. You've got a leak! By removing the event listener when the window closes, the rest of the objects can be marked as ready for garbage collection. Even though a new set of objects are created by build(), the old ones are gone from memory and this leak is fixed.

Memory leaks can be a problem for Android, even though we didn't highlight that platform in this lab. You can use the DDMS tool, and its Allocation Tracker component to watch for such leaks. We choose to use Instruments in this lab because the output is by far more obvious and the steps to discover a leak are simpler.

In this section, you learned how memory is managed by JavaScript and Titanium. You learned that you must actively manage memory by actively managing the allocation and destruction of Titanium objects. You also learned how to use Instruments to monitor memory usage and potential leaks for iOS development.